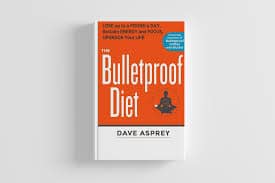 The dictionary defines hacking in “computerese”  as to devise or modify (a computer program), usually skillfully.   Dave Asprey challenges  us to the concept of “biohacking” in his book “The Bulletproof Diet”.

Dave Asprey is an early Silicon Valley computer engineer who made millions with Internet hacking.  He describes hacking as needing to make complex systems work even when all the pieces of the puzzle are not there.  In that respect, he came to understand that the human body is very much like a complex computer program.  There may be data that is missing or misunderstood and perhaps it would be possible to “biohack” to solve his own health problems.

In spite of his success with computer programing, Dave Asprey describes himself as being in miserable shape.  He weighed 300 pounds and was unable to lose the extra weight in spite of following various diets and a strenuous exercise program.  Other health issues included chronic sinus infections, strep throat, foggy brain and difficulties with focus.  He was always tired and overwhelmed with the stress in his life.

So he came to look at his body and engaged what he calls biohacking “the art of using technology to change the environment inside and outside of your body to take control and make it so what you want.” His endpoints of success would be such things as how he felt, how he performed, the success of his relationships with others and happiness.  As programmers look to find potential flaws, he took to “troubleshooting” his environment and evaluated scientifically what was working and what was not.

In the end, he describes that the roles of inflammation, toxins, hormones, neurotransmitters, gut bacteria and more play huge roles in the efforts to nourish your body and your brain.  He presents that the strongest variable in achieving goals of top performance is far and away your diet.

In his biohacking journey he discovered that he had thyroid (Hashimoto’s), adrenal, testosterone and estrogen problems. Realizing that saturated fats and cholesterol are the building blocks for the sex and adrenal hormones, he deviated from the low fat philosophy being promulgated and started eating butter from the milk of cows who had be raised eating grass.  Magic happened as his focus increased and his weight decreased along with inflammatory markers.  He discovered the importance of a molecule called vasoactive intestinal polypeptide (VIP) which when depleted disturbs our master glands (pituitary and hypothalamus)  leading to problems with insulin and glucose regulation creating cravings for sweets.  Paying attention to proper functioning of VIP is a cornerstone to the ideas he presents in his book.

Because our medical system likes to use techniques such as double blind, cross over studies which tend to limit the variables as much as possible, we are prevented from understanding our human functioning as a system.  What usually evolves is something like the conventional treatment for hypothyroidism.  Practitioners are taught to test for thyroid stimulating hormone (TSH).  If the TSH gets too high because of the effort to stimulate more thyroid hormone production from the thyroid gland, a single thyroid hormone, l-thyroxine (T4) is prescribed.  When the TSH level comes down because of the presence of T4, the treatment is considered a success.  However, for vast numbers of people, the low thyroid symptoms are not relieved but their practitioners are unable to shift from this linear thinking to a systems analysis, basically requiring biohacking until the other variables are revealed.

Practitioners who have embraced using bioidentical hormones in a symphony of hormones in their practices really have broken away from their linear thinking and have learned to biohack for their patients.  It’s exciting really.   Dave Asprey presents much much more in his book and invites us all to learn how to biohack our way to optimal health with focus, energy and excitement.

It has taken the efforts from someone who is systems minded and who is trained to collect and evaluate data points in a systematic and scientific approach to open our minds to this approach.