Depression After Childbirth: How to Recognise, Treat, and Prevent Postnatal Depression

Home/Depression After Childbirth: How to Recognise, Treat, and Prevent Postnatal Depression
Previous Next

Depression After Childbirth: How to Recognise, Treat, and Prevent Postnatal Depression 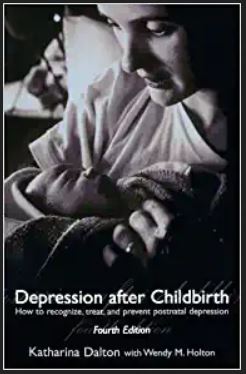 Category: Book Reviews
Author: Katharina Dalton
Depression after Childbirth Dr. Katharina Dalton published her book on postpartum depression in 1980, nearly 4 decades ago. Dr. Dalton was a pioneer in women’s health. She coined the term premenstrual syndrome (PMS) and identified that progesterone is the key to relief in those women who suffered each month after ovulation and before bleeding. She then turned her attention to the complicated issue of depression after childbirth.

Depression after Childbirth
Dr. Katharina Dalton published her book on postpartum depression in 1980, nearly 4 decades ago. Dr. Dalton was a pioneer in women’s health. She coined the term premenstrual syndrome (PMS) and identified that progesterone is the key to relief in those women who suffered each month after ovulation and before bleeding. She then turned her attention to the complicated issue of depression after childbirth.

The “Blues”
Even then, Dr. Dalton described depression with increasing degrees of severity. The most common was called, “maternity blues”, “baby blues” or “postnatal blues”. It would start within 3 to 10 days post-delivery, but would pass. The “blues” presented with lots of tears and crying, with a sudden onset and often with no apparent reason. In those days, women who had just had a baby would stay in the hospital for 14 days. This was enough time, generally, for this mild form of depression to fade away while having plenty of support.

Post Natal Exhaustion
Tiredness and lethargy that no amount of sleep can fix is a mild form of depression that can persist as long as 6 months. Dr. Dalton identifies that the plunge of hormones that occurs at delivery may be involved. She particularly points out that low thyroid could be a factor along with low potassium and iron levels. These can be evaluated and supported with supplementation. If mom is experiencing falling asleep at any time day or night, lank and thinning hair, feeling cold and has a slow pulse, testing for thyroid function should be done.

Characteristics unique to postpartum depression
A hallmark of other forms of depression are problems with sleeping. However, women with depression after childbirth experience no problem sleeping and indeed, no amount of sleep seems to be enough. They are irritable, have enormous appetites and feel achy all over. They isolate themselves. Suicide is a real risk.

Postpartum Depression and PMS
Dr. Dalton points out that the main features of postpartum depression, tiredness, irritability and depression are also main features of PMS. These symptoms arise from hormonal problems rather than heralding the need for antidepressants. The appropriate hormones such as progesterone and thyroid can provide relief. Swings in blood sugar also occur. Low blood sugar brings on a surge of adrenaline, the “flight or fight” hormone, with reactions such as fury and aggression. Appropriate diets can alleviate the blood sugar swings.

Psychosis
The most severe form of postpartum depression is a psychosis. Women can totally disassociate from themselves and wind up being hospitalized. Dr. Dalton found that progesterone can have a dramatic effect reversing the symptoms. Ironically, records at the time showed that those women who were happiest during their pregnancies and eagerly anticipating the baby were at the highest risk. Most times, psychosis begins within two weeks after childbirth. Another dramatic change in hormones occurs when the mother stops breastfeeding and postpartum depression may start at that point. Postpartum depression can also occur after miscarriages and terminations of pregnancies.

Prevention
Dr. Dalton concludes that the best practice would be to prevent depression from occurring in the first place. She describes a protocol using injectable progesterone and progesterone in suppositories at the start of labor and continuing for a month or until menstruation begins again. The pituitary hormone prolactin increases for breast feeding, but excessive levels of prolactin can interfere with progesterone effectiveness just when progesterone is needed most!

Summary
Dr. Katharina Dalton’s work was groundbreaking. She was able to correlate that PMS and postpartum depression were not just “in your head” but had a genesis in endocrine disorders. Then, as even now, all emphasis is placed on the mom during pregnancy and after delivery attention swings to the baby. As moms are experiencing astounding swings in hormones after child birth, all may not be going well. It is important to know that there are real and logical reasons for marked mood changes which can be remedied. Moms and their families can identify these symptoms and speak up to get help.

Written by Carol Petersen and published at www.womensinternational.com

Amazon Affiliate
#CommissionsEarned
(As an Amazon Associate I earn from qualifying purchases.)