Home/Antioxidant, US Enzymes/Sulforaphane – Marshalling A Powerful Antioxidant Defense
Previous Next

Sulforaphane is derived from broccoli and other cruciferous vegetables such as cabbage, Brussel sprouts, and Bok choi.  There are several mechanisms identified to explain the antioxidant, anti-inflammatory, and anti-tumor effects of sulforaphane. A primary role is activating Nrf2 which has a powerful cascading effect.

Since sulforaphane can cross the blood brain barrier, studies evaluated the effects on the central nervous system both as an antioxidant and a detoxifying agent.

Ischemic stroke—Brain stroke may can cause long-term disability and is leading cause of death. ischemic stokes (lack of oxygen) is the most common type   Studies demonstrate that the antioxidant effect of sulforaphane offers neuroprotection.

Hemorrhagic strokes are less common but have a higher rate of fatality.  In addition to relieving oxidative stress through the Nr2 activation, using sulforaphane may resolve hematomas using the same pathway.

Traumatic brain injury (TBI) is a cause of death, long term disability with cognitive impairment. Oxidative stress contributes to the pathology. Sulforaphane may protect the neurons from oxidative cell damage.

Parkinson’s Disease is characterized by oxidative stress. Studies with sulforaphane showed protection of the dopaminergic cells from cytotoxicity. 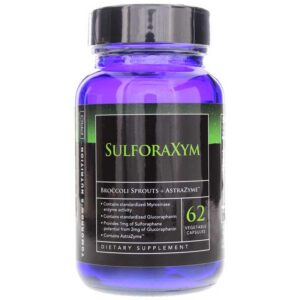