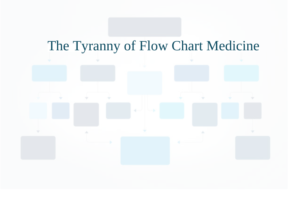 When I started my career as a pharmacist many years ago, one of my mentors warned me that pharmacists were expendable. We would soon be replaced by vending machines. Indeed, I witnessed the first of these being installed in hospitals to dispense commonly used drugs on the floors.

Medical practitioners are equally expendable. With FDA established or committee decided indications for various maladies, we harness the power of large data bases to create flow charts. A patient can answer questionnaires querying their symptoms and in a series of “if this, then that” tracks establish a course of action. But as all computer programmers will admit “garbage in, garbage out”, the flow and the results are completely dependent on the data admitted or not to the program. The program is not designed to readjust to new options nor is it particularly designed to prioritize reestablishing health.

The difficulty accessing low dose naltrexone is a good illustration. Dr. Bernard Bihari introduced the concept in 1985. Decades later, this option has not yet been programmed into the flow chart. There are political and economic reasons for leaving it out. Practitioners are reduced to assist feeding data to the program and are unable or unwilling to opt out in favor of the patient.

Following is a review I wrote about a 100 year old article featuring Dr. Eugene Hertoghe. He beautifully describes his observations and ideas about “feeding” thyroid to patients with a marked constellation of symptoms. Good medicine should be life restoring, celebrating the intuition and observations by dedicated practitioners. Good medicine is not found in a flow chart.

Dr. Eugene Hertoghe was a Belgium physician who became a foremost thyroid expert in his time. He became so noted for his keen observations that one of the signs of hypothyroidism – the disappearance of the outer third of the eyebrows – is named after him and called the “Sign of Hertoghe”. He was invited to address the International Surgical Congress at what is now Columbia/NY Presbyterian Hospital.

His presentation reads like a story. The narrative reveals his observations, the conclusions he drew, the serendipity of finding a research report describing the symptoms of a patient who had had their thyroid removed and applying this all to a hopeless case he had just encountered. His success with “feeding thyroid” with this first patient unsettled him so that he racked his memory and tracked down previous patients he had not been able to help before because he had failed to interpret their hypothyroid symptoms at the time.

He states that 9 of 10 people who suffer with hypothyroidism are women. Thyroid sufficiency is needed for menstruation, pregnancy, lactation and even the uterine involution after pregnancy.

Let’s start with menstruation. Very heavy menstrual bleeding or menorrhagia is a hallmark of thyroid defect. He cites two possible mechanisms. One is that the mucous membrane of the uterus is infiltrated by the defective uterine muscle cells causing instability. Secondly, the hypothyroidism creates a sort of hemophilia condition in the blood with a higher propensity to bleed. You can even observe this with small scratches on the skin causing extensive oozing.

He also believed that women need a more decent supply of thyroid during menstruation. Headaches, muffled tone quality in the voice, lassitude, back pains and constipation may show up as low thyroid symptoms. He even recommends just adding thyroid supplementation during this time.

During a pregnancy, the thyroid gland becomes enlarged and produces much more thyroid hormone. He claimed that this additional thyroid hormone is responsible for the arrested menstruation which protects the fertilized egg. Chronic miscarriage could be tied into an insufficient amount of thyroid hormone available to stop menses.

Because large amounts of thyroid hormone have become available and stored during a pregnancy, part of this additional thyroid of pregnancy is called up for the energy needed for labor and delivery. Another need is for the uterus to involute – that is the heavy walls need to degenerate and oxidize and return to normal size.

Thyroid hormone has to be abundant for lactation. Women who have had a quick involution of the uterus also have a good milk supply. He suggested using thyroid supplementation when the milk supply is scanty and menstruation seems to return too early.

This encapsulates a small amount of the information, Dr. Hertoghe presented over 100 years ago. It’s interesting that a young woman who has heavy menstrual bleeding or complaints during menses today is much more likely to be prescribed birth control pills to regulate her cycle rather than to address an underlying low thyroid situation. Dr. Hertoghe applied his skills as a medical detective successfully during his career, becoming renowned for his expertise in thyroid defects. Today, practitioners are much more likely to depend upon blood tests, procedures such as ultrasound and curettage rather than to rely on their own sense of observation and experience. The question remains whether we are better off 100 years later or not.