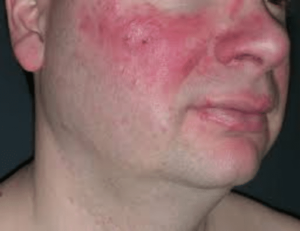 The definition of acne rosacea at medicinenet.com is: “A chronic skin disease that causes persistent redness over the areas of the face and nose that normally blush mainly the forehead, the chin, and the lower half of the nose. The tiny blood vessels in these areas enlarge (dilate) and become more visible through the skin, appearing like tiny red lines (telangiectasias). Pimples that look like teenage acne can occur. Rosacea occurs most often between the ages of 30 and 60, especially in people with fair skin. It affects both sexes. Although it tends to occur more in women than in men, it is often worse in men. In most people the symptoms come and go, although it tends to worsen with time.” Conventional medicine goes on to say that it is incurable and attempts to mitigate symptoms with the use of antibiotics and anti-inflammatory steroidal creams.

However, Dr. Jonathan Wright, writing in the April 2022 issue of Green Medicine Newsletter points out that the cause and cure for rosacea was published in 1920 in the Lancet (Ryle JA, Barber HW. Gastric Analysis in Acne Rosacea. The Lancet. 1920 December 1195-1196.) Taken from that paper: “It has long been noticed that the appearance of the tongue in the majority of patients suffering from rosacea is characteristic; it is broad, flabby, pale in colour, and markedly indented at the edges. Believing that such features are frequently an accompaniment of hypochlorhydria, we prescribed the acid hydrochloric, well diluted in water, to be taken after meals or sipped during the meal. The results obtained with this treatment have been very satisfactory and frequently almost magical, even in the very worst cases.”

A foundation of Dr. Wright’s practice has always been to test for the stomach acid production in his patients. In 2001 he published a book with Lane Lenard, PhD “Why Stomach Acid Is Good for You”. In addition to the betaine hydrochloride, he may add probiotic strains of lactobacillus acidophilus. (Theralac Pro) Because the gut flora is disturbed, he also prescribes vitamin B12 along with B complex to restore what is lost with an unhealthy microbiome.

Dr. Wright notes the greater incidence of SIBO (small intestine bacterial overgrowth) in patients with rosacea. He prefers rather than chasing the bacteria with antibiotics to treat the root cause of insufficient stomach acid.

An unhealthy gut microbiome has many poor health manifestations and insufficient stomach acids contribute to shifts in the microbiome. Low stomach acid also contributes to the difficulty in digesting proteins and absorbing minerals. (Enzylase) Acne Rosacea is an example of a skin disorder which starts in the gut.